März 03, 2016
According to Oxford Dictionaries and Wiktionary you will find the following under the word conspiracy:

"... A secret plan by a group to do something unlawful or harmful. ..."
"... The act of two or more persons, called conspirators, working secretly to obtain some goal, usually understood with negative connotations. ..."

The collaboration of several people at the BCV spanning over several hierarchical levels of the bank is beyond doubt. The conspiration began with the "simple" clerk Mr. Christophe Meylan, followed by Mr. Raynald Mayor, proxy holder of the BCV Morges, as well as Mr. Patrick Blanc, vice branch manager of BCV Morges. In addition the lawyer Mr. Pierre Godel and the CEO Mr. Pascal Kiener were also involved in the incident. Last but not least, BCV's Compliance Department was also informed about my case.

The objective was clear, to keep me with my business idea away from the Swiss market in order to protect the local companies from my competition.

The fact that the second largest Swiss Cantonal Bank has to resort to such means in order to protect local companies shows very clearly how promising my business idea in reality was!

Today I optimized my website for the Google search engine.

The goal of my optimization is that through entering certain search words into Google to have my website appear on the first page in the ranking.

In addition to Google, the search engines Bing and Yahoo are also of (great) importance. For this reason, I have also registered my website at Bing and Yahoo. 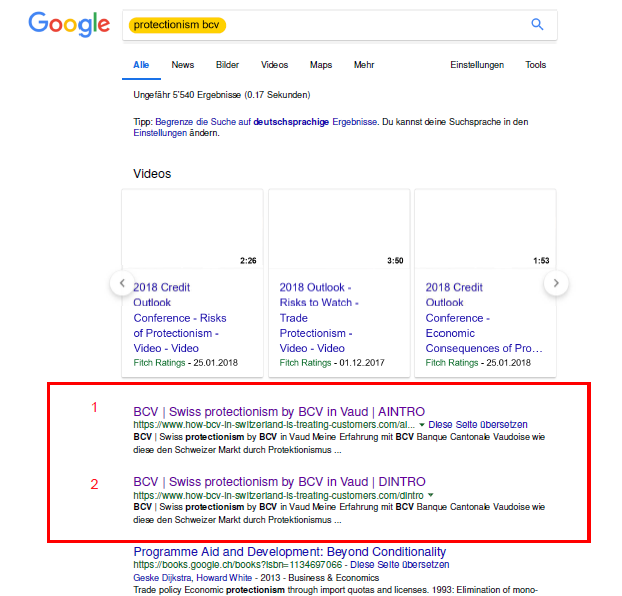 The first successes is visible in my search engine optimization. For example, using search words "protectionism" and "BCV", my internet site is found under # 1 and# 2 in the Google ranking.

I will continue to pursue my efforts to place additional keywords in the ranking, in order to achieve good results.